A Good Talking, Too by Joseph Hett
Conversations with all the people who know the people you wish I would interview
Fred Thomson's wife: MEL THOMSON July 1, 2026 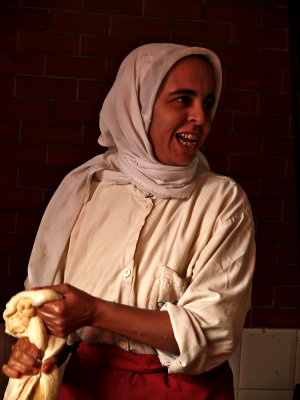 My chat with Mel Thomson, above, began as she baked me some of her family-famous bread. Says she: "If Fred was here, he'd be telling me exactly how many times I'd made bread since we'd known each other, or he'd tell me if I was kneading it more or less than usual. He keeps track of everything like that. It's not annoying--I think it's cute." [Photo credit: Will Hett]

This week I'm speaking with Mel Thomson, the wife of social data pioneer Fred Thomson, about what it's like to be married to one of our decade's most influential personas. Fred Thomson was first known for revolutionizing the way our world treats data, insisting that "it's okay for people to be data, too" in his best-selling book Make Your Own Personality, or: What Data Centers Can't Tell You About Yourself. Fifteen years later and Fred Thomson has been appointed head of the United States's newest executive department of government that he himself set in motion: The Informational Department, or TID.

Fred Thomson's personal life, however, is characterized by his obsessive life-logging. Some sources claim that he tracks up to three hundred variables daily using a variety of lifelogging systems that he invented. Children below the age of eighteen, as we are all aware, are now required to track their own personalities each day using some form of covert lifelogging--be it a journal entry, a series of photographs, or something more inclusive such as Thomson's own Personal-T software that he released last month.

But a majority of critics are claiming that the infamous lifelogging legislation Thomson helped pass two weeks ago will only serve to make our society even more data-bound. The Alaskan Senator Joe Bailey claimed last week that "This legislation is...like telling kids with cavities to eat better junk-food," explaining "You're just going to make the bigger problem--be it data-dependence or rotting teeth--even worse."

But as I learned during my conversation with Mrs. Thomson, Fred Thomson's wife of twenty years and self-proclaimed Bonk Master (don't ask), Fred Thomson's philosophy extends well beyond our modern society's problems with automated data-dependence. No, Fred Thomson doesn't think automation as we know it now will last all that long: What he's really worried about, you see, is immortality.

THE JEHOSAFET: Mel, I know you're thinking I'm here to ask you about your husband, Fred. And while that's partly true I'm also interested in hearing about your take on this new government department idea.
MEL THOMSON: I think it's a great idea. But then, I would say that, wouldn't I?
JEHOSAFET: I suppose so. But tell me, when did you first hear about it?
MEL: Fred had mentioned the idea to me a long time ago--back when he was writing [his first book] A World Without Me--and I immediately told him I thought it was a great idea. He didn't have too much of it sorted out back then, of course, but at this point he must have spent at least twenty years planning all of this. He could tell you for sure how long it's been.
JHSFT: So you're telling me that you were probably one of the first people to hear about the idea. And one of the first to support it?
ML: Yes, actually, Fred and I talked about this just a few weeks ago, in fact. We looked it up in his logs, and apparently [she blushes] he had written in his notes that it was my idea.
J: You're kidding!
M: But I don't believe that, I think he was just being nice when he wrote that down.
J: But if it's in his logs, certainly it must have been what happened...
M: You're trying to set me up with that one, Jehosafet. You and I both know that a lifelog isn't about truth. It's about organizing your past for the benefit of your future self. Anyone who disagrees with lifelogging because it's unfaithful to the truth must have missed the point of history class as well.
J: And now we're all writing our own histories.
M: That's right. Better to write it yourself than to have someone else write it, surely. Not to be rude, though, Jehosafet, but you said you wanted to talk more about me--and here I am feebly arguing for something Fred is much more articulate at discussing.
J: You're too modest, Mrs. Thomson. But yes, you're right, I do want to talk more about what it's like to be married to Fred. That's something you alone experience.
M: It's really quite easy--he spends most of his time just, you know, doing things. We stay out of each other's way, mostly. He's extremely productive--more so than me anyway. I, for my part, prefer doing nothing at all! We're a funny pair that way.
J: You mentioned to me on the phone the other day that doing things together was sometimes more trouble than it's worth.
M: No, not at all! That's not what I meant by that. I was telling you about us playing cards [the Thomsons play Canasta every Saturday with their friends] and I said that sometimes he drives me crazy with all the stats he keeps track of. Like, he tried to tell me one night that I was playing poorly because it was a Tuesday, that I always play worse on Tuesdays. And he could prove it, you know, because he had the data right there!
J: That would drive most people nuts, surely. And--
M: But really, Jehosafet, it's not that different from any other relationship, except for tiny things like that. And everyone's got their own idiosyncrasies, so in that way we're entirely normal. I mean, at times it was a bit difficult for me having to live in an entirely documented world, but now I'm used to it. I love him, he means well, but the Canasta thing I just found funny. Frustrating, but also funny.

It's really not that different from any normal relationship," she insists. "I mean, at times it was a bit difficult for me having to live in an entirely documented world, but now I'm used to it."

J: And you, Mrs. Thomson, what sort of data do you keep track of?
M: Not much, believe it or not. I have all of my online accounts, you know, but of course Fred has set me up with a few personalized data streams so my life's not "in the bits," as he says.
J: Can you share any of those data streams with us? Just a description, of course, not the stream itself.
M: [nervous laugh] Well then, that would still defeat the purpose now, wouldn't it? But I suppose I can tell you that I know a lot now about the way I cook. I've been making better bread in the last six months [when Fred set up her personalized data streams, apparently] than I ever have been, and that's been really wonderful for all of us in the house.
J: Well it's been equally wonderful speaking with you, Mrs. Thomson. Anything you'd like to add before we end the interview? Anything you'd like to say about yourself, or about your husband?
M: Actually, there is. Fred wanted me to clear up something regarding the recent legislation, something he thinks people should be discussing more.
J: Go ahead.
M: Think about when you die, Jehosafet. Do you really want to be resurrected? Fred's legislation enables our children the freedom to really die. And that's why he thinks it's so important.

And there you have it, folks, straight from the woman who knows him best.

This is the first interview in a series talking to the people who know the people responsible for the TID, the newest department of the U.S. government. Hosted by editor-in-chief Joseph Hett.